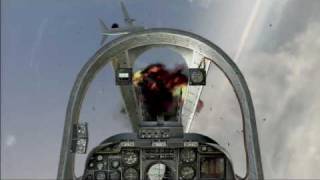 What's the one thing that enters the consciousness of every warm-blooded American when you mention dogfighting fighter jets? If the answer isn't a movie starring a bunch of sweaty dudes playing beach volleyball in tiny jean shorts with Anthony Edwards wearing a painfully awkward cutoff t-shirt, then you're lying to yourself. Luckily that very same flick is home to some of the coolest aerial battles ever set to the silver screen. It's called Top Gun and it has more man material than anything you'll find on Cinemax.

Ever since then game companies have been trying to emulate the feeling that so many imagined with Goose and Maverick in the cockpit. The latest game to try its hand is Tom Clancy's HAWX from the Ubisoft Romania studio that brought us two Blazing Angels titles. HAWX is a spiritual successor of sorts but benefits from being in a slightly distant future which means that players have the benefit of flying some moderately futuristic aircraft as well as some handy dandy navigational technology that's a bit too smart for its own good.

It's important to note that HAWX (High-Altitude Warfare Experimental Squadron) is not a flight-sim. There's no fuel gauge to worry about, no real ammunition controls -- planes carry upwards of 200 missiles -- and no worries of blackouts, red-outs or any other kind of 'outs.' While I fully understand not wanting players to have to be mindful of their gas usage like they're in a Chevy Suburban, the planes in HAWX move with very little realism. They look like their real life counterparts, but you can essentially fling them around the sky with reckless abandon, regardless of make or model.One issue I had with every plane, and this is a common occurrence for games like HAWX, is that there just isn't a good sense of speed as you careen through the skies at more than 1,000 miles per hour. Even getting close to the ground isn't all that inspiring. It feels more like you're flying an airliner than a fighter jet going faster than the speed of sound.

So why are you zooming around turning enemy aircraft into mangled metal? Well, it turns out there's a bit of a conflict going on in the world. You play as Captain Crenshaw, a former United States flyboy whose squadron has been dissolved for whatever reason. Looking for work and money, Crenshaw turns to private military groups and stumbles upon a company called Artemis. Long story short, Crenshaw works for Artemis, Artemis gets contracted to protect Brazil; Crenshaw follows. Then Artemis decides to attack the USA; Crenshaw revolts. Before you know it Crenshaw is fighting for the red white and blue again, trying to repel the attacks by Artemis over some of our nation's landmarks.