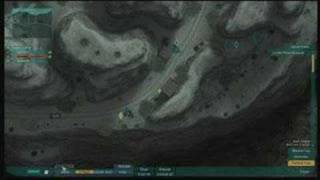 Ghost Recon is a franchise that was born on the PC, so it was nice last year when Ubisoft commissioned a separate version of Tom Clancy's Ghost Recon Advanced Warfighter that was built directly for the PC instead of merely porting over the Xbox 360 game of the same name. That way, Xbox 360 gamers could get a third-person action game while PC gamers could get a hardcore first-person shooter. That trend continues with Tom Clancy's Ghost Recon Advanced Warfighter 2, which again comes in a separate PC version that's tailored for the platform. Nevertheless, you'll need to be a pretty die-hard fan of extremely unforgiving combat to get through this one

GRAW 2 picks up immediately after the events of the first game, though you needn't have played it to understand what's going on. Mexican rebels have some nukes and are setting up shop next to the Texas border, and you, as a member of an elite U.S. Army Special Forces unit, must stop them. While the PC version features entirely new levels and environments, it does lift many of the story elements and voice-overs from the Xbox 360 version. In essence, this is basically a retelling of the Xbox 360 game.

The major difference between the two versions is that the Xbox 360 is much more action focused, while the PC is a lot more simulation heavy. It's a huge difference. You can sprint your way through the Xbox 360 game, knowing that you can heal up easily whenever you hit a resupply point. In the PC version, the pace is a lot slower and more methodical. If you try to run-and-gun through you'll get cut down within seconds. It's all about moving slowly, using cover, and suppressing the enemy with cover fire. You have a fairly small health bar, and it can be drained relatively quickly. Even worse, a hit in the wrong place will kill you no matter what, so the PC version is very much one shot, one kill. And if you do manage to find a place to resupply, you do not heal.

While this kind of realistic authenticity is the hallmark of Ghost Recon games on the PC, GRAW 2 is a lot tougher than its predecessors. Part of that is the nature of the gameplay, which is very unforgiving, but it's also due to the huge size of the levels. You have to carefully ration your health bar or else you'll find yourself in a bad spot. For instance, if you take a couple of hits early on, it's usually best to just start the mission over because odds are you'll never survive the middle and later parts of the level, especially since you can't heal. There is a quick save and a quick load that you'll need to use early and often, as you'll get cut down without warning a lot. And this was on the easiest difficulty setting. Trying to play at the default difficulty is murder.