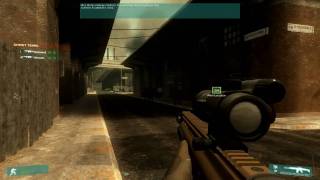 The game takes place over the course of three days in 2013, beginning in Mexico City. A U.S. spy plane carrying Guardrail IX, a device capable of disrupting wireless communications, is shot down over Nicaragua. Intelligence discovers a plot to transfer the device to rebels in Mexico City and the Ghosts are sent in to retrieve it. One of the rebels is identified as Colonel Carlos Ontiveros, son of Mexican Gen Ontiveros who was a student of Bud, Mitchell's friend and a UH-60 pilot. The mission is aborted when a coup d'état begins in Mexico City and the Ghosts are ordered to the capital immediately, where a summit involving U.S. President Ballantine, Mexican President Ruiz-Peña, and an unnamed Canadian Prime Minister who are signing the North American Joint Security Agreement (NAJSA), is taking place. The summit is attacked by Mexican revolutionaries who kill the Canadian Prime Minister and force the Presidents of the U.S. and Mexico into hiding. Mitchell is sent to extract both leaders.