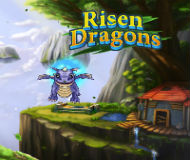 Enter a land of magic in a time of myth! Cruel beings from another dimension have devastated a floating island, scattering its fragments to the four winds and leaving its peaceful populace helpless in the face of war. To defeat the enemy, you must protect a powerful sorceress as she closes the portals that gave your adversary passage. During battle, you’ll defeat wave after wave of enemies using three magical dragons, build and upgrade a formidable array of towers to give you a strategic edge, and utilize special attacks to get you out of tight spots. Between skirmishes, you’ll use the dragons to reassemble the island, play mini-games to acquire the resources you need, and uncover more enemy portals. Can you conquer the evil scourge and repair the once prosperous land? The dragons are at your disposal, and the future is in your hands!