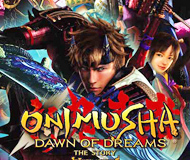 The game takes place in 1597, fifteen years after the defeat of Nobunaga Oda at the end of Onimusha 3: Demon Siege. Nobunaga's former vassal, Tokichiro Kinoshita, takes the name of Hideyoshi Toyotomi and control of the country, unifying it under one banner and essentially ending the wars that had torn the land apart under his former lord's banner. However, this period of peace ends with several natural disasters acting as an omen of things to come including the appearance of an "Omen Star" in the sky. The demonic army known as Genma return to Japan due to all of the natural disasters and prey on the innocent. Hideyoshi ignores all of the chaos sweeping the land. In addition, Hideyoshi sends massive armies of men and Genma to invade the Asian continent over seas. Hideyoshi uses the Genma armies to gather "cherry trees" across Japan.

The story follows Soki, Hideyoshi's illegitimate son who carries the power of the "Black Oni", the God of Darkness. He is on a journey to stop Hideyoshi's plans. He travels alongside a bagworm creature named Minokichi protecting humanity from the Genma. Across his journey Soki also encounters several warriors who are fighting the Genma including Akane "Jubei" Yagyū, a young member from the Yagyu clan who inherited Oni powers from her grandfather and is on a mission to kill her uncle; Ohatusu, Soki's childhood friend who is in search of him; Tenkai Nankobo, a monk formerly known as Samanosuke Akechi who is fighting the Genma again and requires Black Oni's help; Roberto Frois, a Christian missionary who wants take revenge on his former comrade Luis; and Arin, a girl with psychic powers who travels alongside Tenkai and assists Soki in becoming the "Onimusha", the Oni warrior capable of saving mankind. 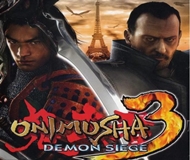