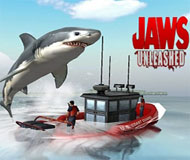 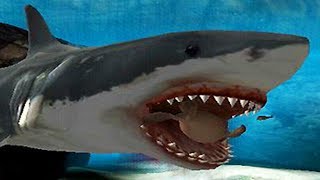 There are two ways you can look at Majesco's oft-delayed underwater actioner, JAWS Unleashed... You can either (A) Swim away in disappointment from a project that had more than two years of production time (with an experienced developer) and yet still finds itself full of problems and bugs, or (B) stop being such a pretentious conch and enjoy the open-ended "Grand Shark Auto" for what it is -- mindless fun.

Of course, if we're being fair, it's actually hard to accept one of those final conclusions without accepting the other. Truth be told, Appaloosa's JAWS Unleashed embraces both of those justifications rather symbiotically (much like barberfish and hammerheads do in real life). Though it's correct that JAWS does suffer from a number of bothersome glitches, numerous camera issues, and sometimes-infuriating lock-ups, it also benefits from a number of gruesomely satisfying missions, a large environment to play around with, and unique combat maneuvers that you just can't do in any other game. Of those, which sounds more tolerable?