The stage of DRAKERIDER is set in Igraine, a world on the brink of destruction due to the repeated attacks of the Dread. Aran Lawson, once an ordinary tracker, now finds himself as a dragalier—and mankind's final hope. This is the story of our hero and his dragon companion, Eckhardt.

The game lets you take the reins with a battle system like no other. Instead of entering commands, control the chains to execute your strategy. Easing off the reins will allow Eckhardt the freedom to unleash powerful attacks. Too much leeway, however, will trigger his primal instincts, endangering Aran.
Led by Akifumi Kaneko, the game is developed by WITCHCRAFT Inc., famous for their work on various anime and other RPGs. This title maintains the high quality and integrity for which they are known.

The characters are voiced by an array of talented artists, including Ryohei Kimura, Nana Mizuki, Shinichiro Miki, Kana Hanazawa, Keiji Fujiwara, and many others. The powerful theme song "unleash," performed by Shoujyo Byou, accentuates the powerful storyline and intense battles. 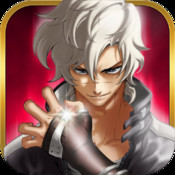