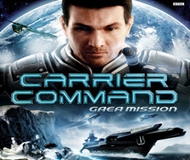 From the creators of the award-winning Arma™ tactical military shooter series comes a next-gen re-imagination of a groundbreaking 80s classic. Set in a vast open archipelago, Carrier Command: Gaea Mission brings a breathtaking combination of action game and strategy elements!

As a result of a catastrophic war between the United Earth Coalition and the Asian Pacific Alliance, Earth has been rendered an almost uninhabitable wasteland. The only hope lies in a distant planetary system, where the moon Taurus holds the key to restoring Earth's dwindling water supply. As a battle-hardened member of the surviving UEC forces, Lt Myrik is put in command of an armed vehicle carrier. By traversing the seas and establishing a network of island bases, his mission is to hunt down the enemy and conquer the Dead Zone on the planetoid Taurus.